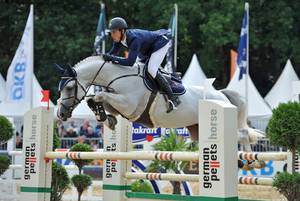 Chap II presents himself in bright white with the very charming type, he is reserve champion of the licensing of the Jumper Breeding Association Oldenburg-International 2012 in Vechta. His gaits are above average, his jumping fascinating, with unbelievable "bells" he releases from the ground, despite the height and width of an obstacle.

Chap II was brillant in nearly every presentation. Vice champion at the Oldenburg licensing 2012, vice winner in his 30 days performance in Münster 2013 scoring 9,75 for show jumping.

In his competitions in 2015 nearly won every start he did. Wonderful courses called the attention to public. His first level course he won scouring 9.0. He did qualify twice in the first attempt for the federal championship with the scores of 8,5 + 9,0. The highlight of the season was the victory of the final qualification of the federal championship with a 9,2 ridden by his trainer Johannes Holzeder.

He convinced with the quality of his first offspring, many winner foals and price record foals

After successful sport and breeding career the sire Cellestial was named 2006 in Oldenburg  "VTV - show jumping stallion of the year". Base of this award were his own success in show jumping over the last years. He combines elasticity of his basic gaits and powerful jumping. As a 5 years old he was the most successful show jumper of his age class, with 7 years he was already good at international level, success at the competition "Sires of the World" in Lanaken ridden by his trainer Heiko Schmidt and with Rolf Göran Bengtsson. Like no other stallion Cellestial combines best manner with power up to the highest international level.

In the current FN breeding ranking  Cellestial is one of the most versatile stallions in Germany. In dressage his value is 116 Indexpoints and in show jumping on 155 that gives him a ranking in the Top 1%. In the mare breeding index of the FN there are 5 Cellestial daughters in the top 10, that makes 50%. His offspring did win more than 380.000 euros, and there are more than 40 horses at advanced level.

Full brother Chap I did finish his performance test as winner of the jumping part with 152,13 points finishing second with 131,93 Poinst. With 7/8 years he had international advance levele victories and in 2014 Chap I did win in competitions on **** level and had 27 placings. Chap I was awarded during the  Oldenburger Hengsttage 2014 in Vechta with the title "VTV-stallion of the year" due to his success. His FN breeding index is 153 and this is in between the top  1% of the show jumpers.