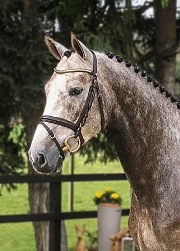 With Picobello van´t Roosakker, Holzeder Stud are pinning their hopes on another young talent from Belgium, who’s presenting himself as a modern show jumper with a lot of charisma. Covering a lot of ground, this youngster’s basic paces further underline his significance. Over the fences, Picobello van´t Roosakker shows off all the quality of his pedigree: attentive in every phase, he has a very consistent jump technique, meeting the highest standards with his speed and elasticity as well as his scope. This excellent assessment was confirmed in the autumn of 2018, when he became reserve winner of the 50-day-test in Neustadt (Dosse), receiving a fantastic score of 9.0 for his attitude, character, willingness to perform, rideability, scope and overall impression as well as in the test rider assessment.

The sire, Kassander van´t Roosakker, bred outstandingly from Echo van´t Spielfeld-Carthago Z-Darco-Chin Chin, is a son of two S-successful parents and represents an extremely performance-oriented line. In 2017, he was champion of the seven-year-old stallions in Belgium and is now creating an international stir under the Belgium top rider Gregory Wathelet. The dam's sire, Canabis Z, was highly successful in international show jumping with Jos Lansink and later Manuel Fernandez Saro, and equally successful in puissance and Grand Prix competitions, at that. At Zangersheide Stud he produced a number of top jumping horses, including Cabreado Z/Daniel Deusser, Zoltan/Gerfried Puck (AUT), Caesar/Andre Thieme and many more. The granddam and great-granddam were successful jumpers at 1.45-and 1.50-meter level, respectively. Great-grandsire Caspar (Eurocommerce Berlin) is one of the most famous jumper stallions of the recent past. Under Gerco Schröder he was part of the victorious team of the European and World Championships in Mannheim (2007) and Aachen (2008).

With Quidam de Revel, team bronze medallist at the 1992 Olympic Games in Barcelona under Hervé Godignon (FRA), there is another world-class stallion in the fourth generation. He later won the Grands Prix of Hanover and Arhus/DEN, among others, under the Dane Thomas Velin, and set breeding standards like no other: ten Quidam de Revel offspring took part in the World Championships in Jerez, Spain, in 2002, among them the later team gold medallist Dollar de la Pierre (alias Tlaloc M) with Reynald Angot/FRA. The fourth dam, Labelle van Sombeke, descended from the internationally successful Goliath Z/Willy van der Ham, is also the granddam of Glock´s London (alias Carembar de Muze), who won the silver medal in individual jumping with Gerco Schroeder at the 2012 Olympic Games in London. This family (NL-merrielijn 260) has produced numerous jumpers successful at 1.60-meter level. 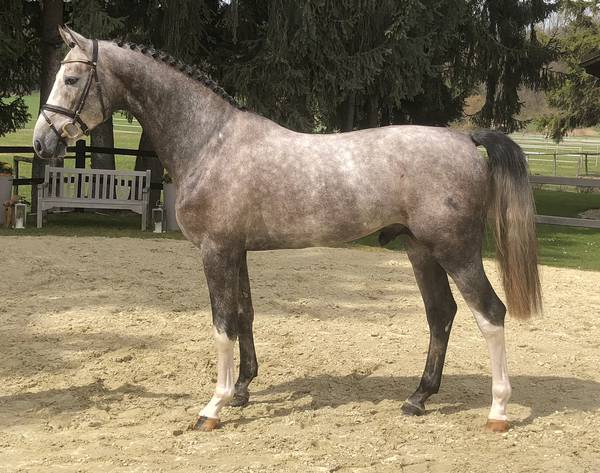